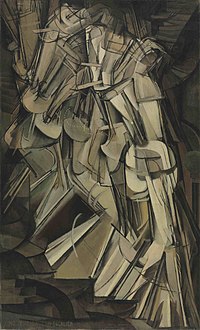 Last week a Twitter friend of mine, @hennartonline, wrote a nice blog piece about feeling constricted by all of the rules that folks are trying to impose on social media and how, frankly, it was making social media not that much fun. I’ve been thinking about her post for a week and it has reminded me of some work I did in my distant past. As a graduate student, studying art history, I wrote my thesis on Marcel Duchamp. An artist often thought to be outside the sphere of cultural and societal influence, his oeuvre is certainly singular. I didn’t accept the premise that he was completely beyond the sway of contemporary currents and argued that I saw echoes  of Bergsonian metaphysics and utopian anarchism in his work.

In my thesis I posited that much of his creative output was a response to the rejection of his painting, Nude Descending a Staircase, No. 2 (1911) from the 1912 Salon des Independants. At that time he’d been working in the Cubist style, consorting with other Cubists and had created what he thought was a Cubist painting. The arbiters of Cubist rectitude however felt differently and rejected “Nude” as outside of their definition of Cubism.

So, where am I going with this — a friend’s post, Duchamp and Cubism . . . ? @hennartonline experienced something akin to what Duchamp experienced — a conflict between arbiters (often self-appointed) and individuals. Social media, like Cubism was in its day, is disruptive. It is avant garde (though with 100s of millions of users SM’s avant gardism is waning) and undefined. It is this disruptiveness, and lack of definition that make it such a powerful tool. Users, both individual and corporate, work each day to define social media; and, as with all movements, there are the self-appointed rules-makers. Most of the rules are great, common sensical, and based in simple good manners. Others, though, are about how to blog, how to tweet, what’s acceptable, and what’s not. These rules go beyond the insistence of social etiquette and seek to define how people should “do social media” in order to be considered part of social media — just like there was a way to “do Cubism,” and it didn’t involve moving nude figures.

In an undefined space such as social media individuals and companies need to find their own way and interact with the medium and its participants in ways that meet their business and personal needs. How JetBlue uses social media and how @hennartonline uses it are wildly different and their needs and uses are different than those of the self appointed SM-guru or the stock trader looking to demonstrate his prowess. Through trial and error (hopefully not too many errors, but there will be some, we’re human) all participants in this movement should be able to find their audience, and generate positive outcomes for themselves and their network of followers, friends, contacts, and even the occasional nemesis, in the most open, imaginative, and personal style possible.